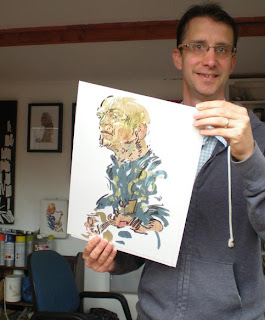 Its a steep learning curve for me, since I've come from the depths of the jazz world but the art residency has got off to a great start at Twickfolk. Sometimes I'm at a loss about the background of the musicians I draw but I've been luckily enough meet some cool people who have helped me along the way. One such person was Ana Veraart, who kindly agreed to write something about Eric Brace for the me and blog....

I met Eric Brace in 1983. We worked together in a posh restaurant. I was making my way through college; Eric was supporting his passion, music. I was lucky enough to be present for the birth of Numbers Up, his first band of considerable note.

Eric has an easy manner in front of a crowd or wirh an audience of one. I suspect this confidence comes from a lack of pretense and a real sense of joy he feels in doing what he loves.

His clear, warm voice draws you in and his music brings you back for more. At the risk of sounding cliche, Eric is music. His love and respect for the art is in the very fabric of his being.

He gets giddy meeting his musical heroes and elated and honored when met with the opportunity to play with them. I remember attending a Marshall Crenshaw concert with Eric. Even though, Crenshaw was at a high point in his career, the college auditorium was fairly empty. Eric indulged me and we sat near the back, but Eric could not contain himself. Before the first break, he was at the edge of the stage letting the music wash over him. Or, at least I thought that was what he was doing. At the break, he introduced himself to Marshall and a few band members. He asked them intelligent, thoughtful questions about their music. It was not just admiration or entertainment as I had thought. The band recognized a kindred spirit and took a longer break to share and talk with him.

That was Eric then and, although I have not seen Eric in sometime, I suspect that is still Eric today --always room for more friends, more joy, and more music.

A big thank you to Ana, a print/poster of the Eric is on its way to her.
Alban