Brooks Williams - more than quite good 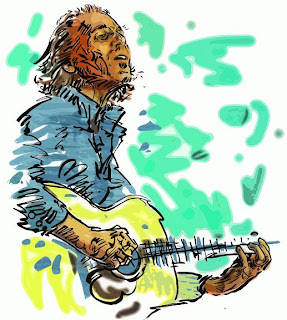 When an American-born musician starts using 'Quite' quite frequently you know he'll be close to your heart by the end of a gig. Brooks lives in the heart of England now, a place that epitomises Englishness, Cambridge.
The day before his performance at Twickfolk I was in Cambridge myself, placing 31 magnetic artworks on the streets as part of the Text and Context exhibition.

He endeared himself to many of us last night as Twickfolk's volunteers tirelessly wrestled with technical hiatus. The power cut out at one point which hardly broke Brooks stride and he seamlessly sidestepped to an acoustic set without any fuss.

It had been a long day for the volunteers at Twickfolk. They had started by making cigar-box guitars after lunch and by teatime were busy playing with 'bottle neck' gusto. A few of these recruits were still brandishing them by nightfall. In fact, one cigarbox wielding gentleman was asked to calm down by other audience members because he was so emboldened by his workshop with Brooks, and started chipping-in with a few riffs.

Brooks was a pleasure to draw. His thin face and strong cheekbones make him quick to capture. The only danger being a flirtation with caricature if I wasn't careful. His set was fast moving and sincere, and very gentle when he was directing his attention to his wife who was sat next to me.
We'll all get a chance to see Brooks again on the Andrew Marr show this December, where if I had a choice I'd like to hear 'Statesboro Blues' and 'Belfast Blues' once more.

Twickfolk regular Geoff Heap sums it up beautifully
"I quite (very much) liked it too!"
Posted by Open Fridge at 06:20