The Sun always shines of Twickfolk 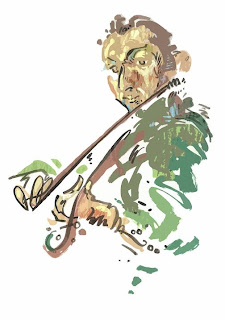 Apologies for being off the blog for a few days. I've had a rush of work including an excellent CD launch at Pizza Express of Burton Bradstock's latest folk-jazz project. I was in the illuminating presence of Rich Rainlore and he'll be writing about the gig on Rainlore's World Of Music in the next few days.

During these damp autumn nights what we need are those bright moments and none could be more cheering than Suntrap. They we're great to draw with 4 distinct characters (the mesmeric Sara Byers unbelievably described herself as unphotogenic) and featuring my favourite instruments to draw, the fiddle, from John Sandall and Mary Wilson. Paul Hoad's dry humour and the modern themes wrapped in well crafted tunes made it a great night.

After several weekends filling walls and my time on various building projects I didnt last the course with the Twickfolk performers last Sunday. I was there long enough though to experience Jacquelyn Hynes' beautiful flute, entwined by J Eoin's narratives. 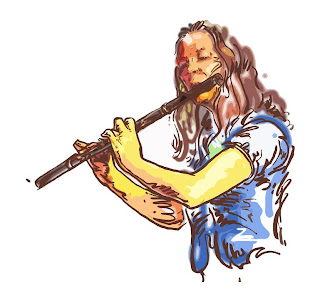 I'd like to note some of the floor spots or support musicians for these two gigs. Twickfolk favourites Sue Graves and Paul Micklethwaite. With a leftfield appearance from fiddler Matt Grabham who Gerry had discovered busking the previous day and invited along.