Dick Gaughan in the Twickfolk spotlight 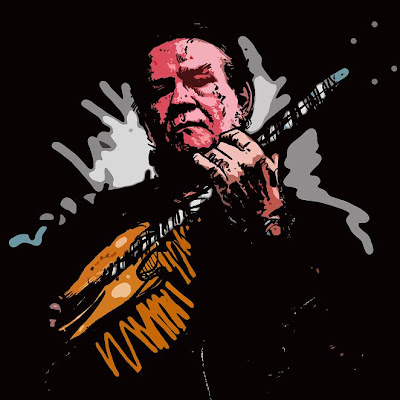 It was a big night at Twickfolk this weekend with both Dick Gaughan and Stuart Forester in the Twickfolk spotlight. With a big crowd, we found ourselves in the folk amphitheatre upstairs and under a fierce red spotlight it felt like we were in a boiling cauldron. The music lived up to it roasting atmosphere and it was a memorable night.
Stuart started off proceeding with excellent and unpretentious set of earthy narratives. Themes included piracy, hellraising and drinking, with 'The Star of the West' being my favourite. The room was packed out and as usual I perched on the stairs. I was soon accompanied by Twickfolk's Paul Micklethwaite who shot several mean Rotherham stares to those chatting on the back rows.
Once Dick commanded the stage, I was joined on my step by Stuart Forester himself. We we're both entranced by Dick and his eyes which we're the smallest smouldering coals held ours for the briefest second. Although he was up on the stage he was at one with us in the audience. His playing and delivery of narratives appeared ferocious but we never felt threatened because he made us kindred spirits to his cause. I was so taken by the red firey atmosphere I left early and opened up the studio doors so that night I could start getting my ideas down on paper straight away.
Dont forget to put the 27th January 2013 (6pm) in your diaries for the Private View of the 'Art Of Folk' exhibition with music from Alan Franks (7-7.30pm). FREE ENTRY.